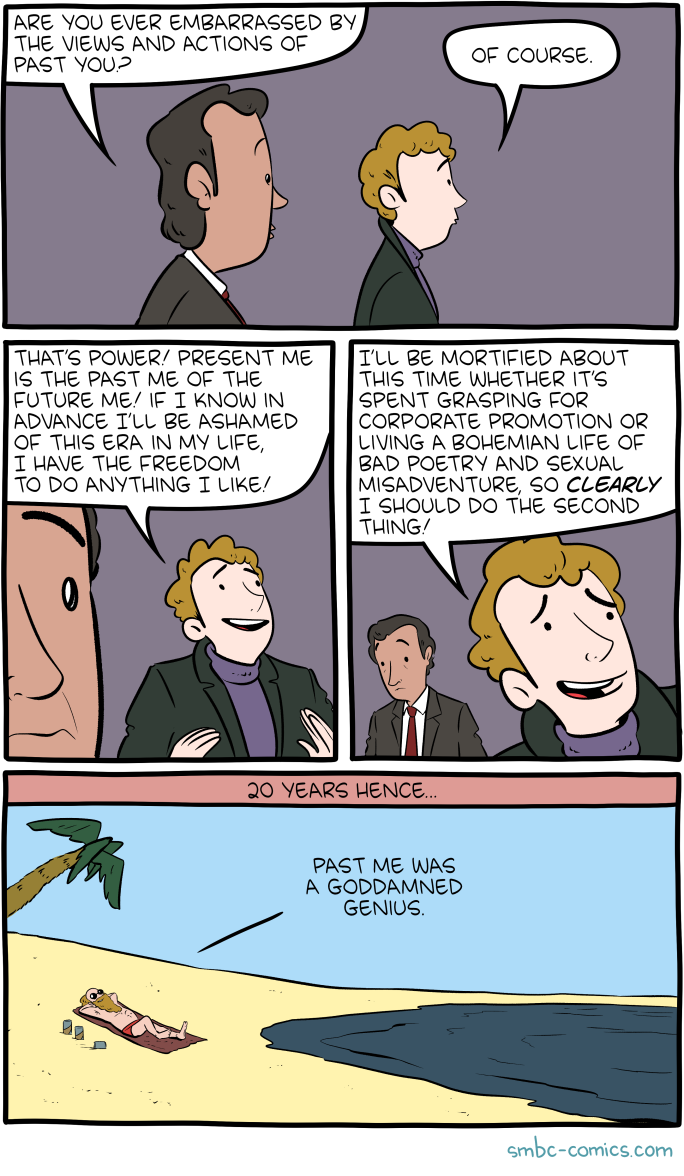 Hovertext:
Rejection of the purple turtleneck for a speedo was also a wise decision.


Hey geeks! A message from James:

Then, come check out http://handtomouththeater.com/blog/future-vote for my new podcast sketch show Hand To Mouth Theater! We have a preview sketch up now wherever you listen to podcasts, and will officially launch in October. Be sure to subscribe, rate, and comment!
Read the whole story 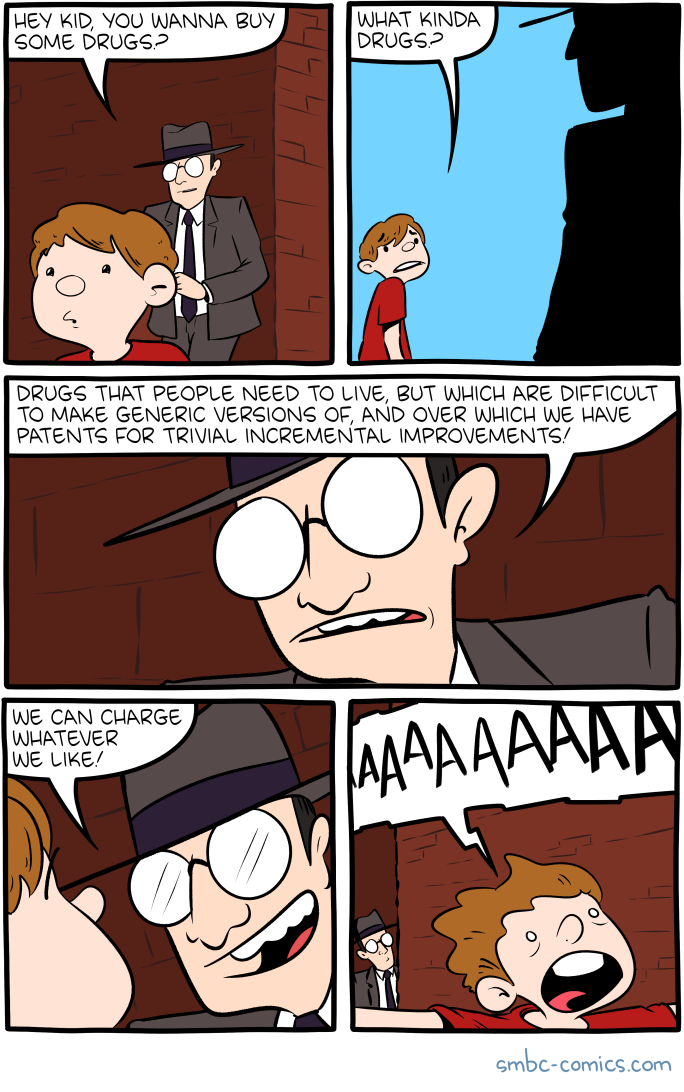 Hovertext:
One day, we will look on the street dealers of insulin as heroes.

jlvanderzwan
reply
You Americans are starving the wrong beast

mkalus
I don’t think it’s big Pharma so much as the “small government” and “free market” people. Insulin and most other medications everywhere but the US are cheap because healthcare isn’t seen as yet another for profit enterprise. 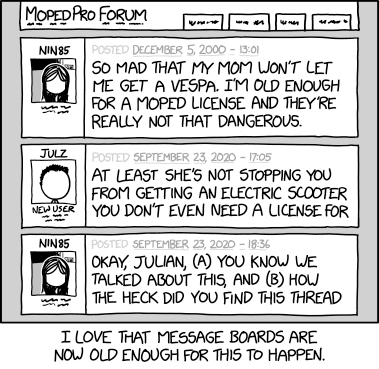 (c) You can have a scooter when you pay for it yourself, and (d) if you can't learn to start a new thread rather than responding to an old one, you'll be banned. [thread locked by moderator]

►►Our Next Fandom 5 Trivia Show is about The Simpsons! THIS FRIDAY! Click the Link to Play - Must be 18+ and Live in the USA or Canada►► http://fandom.link/SimpsonsTriviaInfo

►►Watch the Honest Trailers Commentary LIVE with the Writers!► https://youtu.be/ehfoIVlzmOo 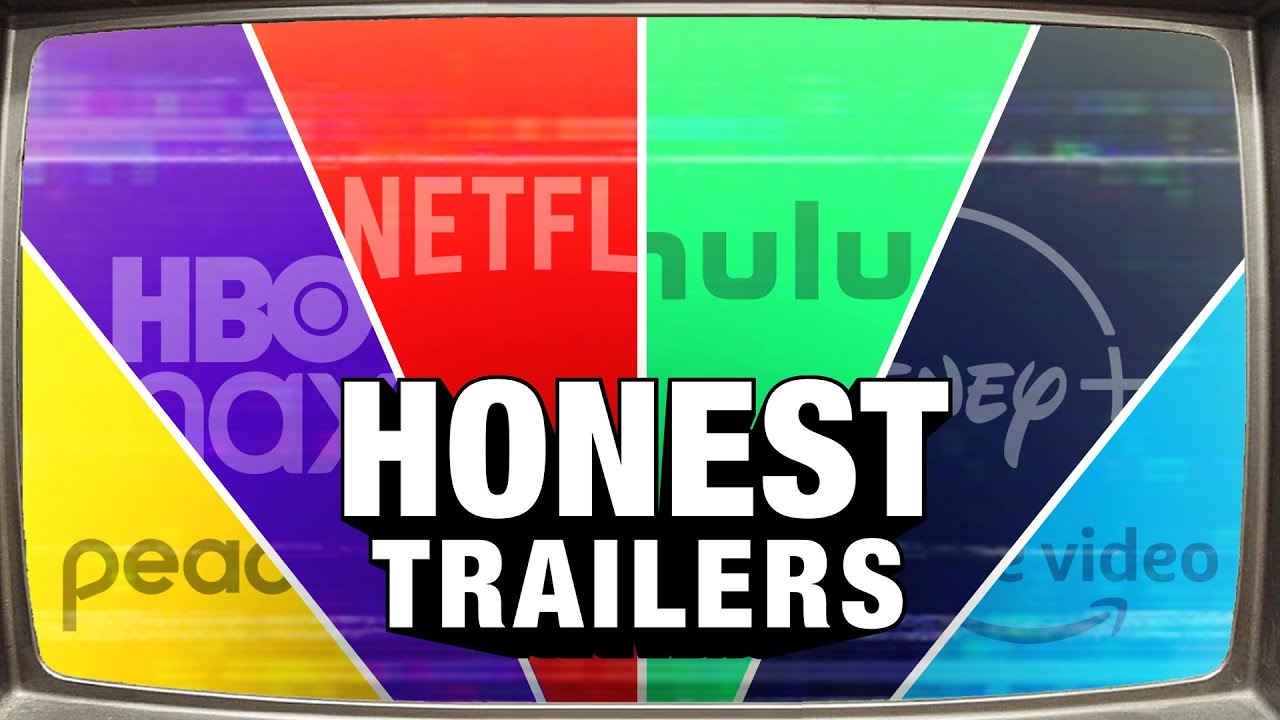 (AUTHOR NOTE: My publisher told me I could post a chapter from the new book. There were 25 chapters to choose from, but I chose this one. Because I wanted to give you a love letter. And it seemed like the most appropriate love letter to give you would be an extremely indirect one that screams, "DO NOT FEEL SCARED—I AM JUST INTERACTING WITH YOU!!")

For the first few years of my life, the only people I knew how to find lived in my house.

We had a neighbor, Richard. But Richard was quiet and rarely outside for long, so I didn't know about him.
One afternoon, though, Richard went outside.

That's how I found out about him. 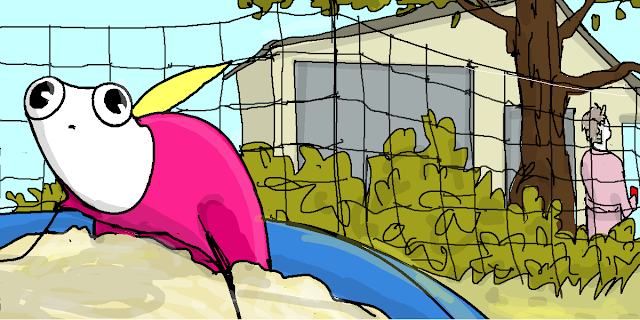 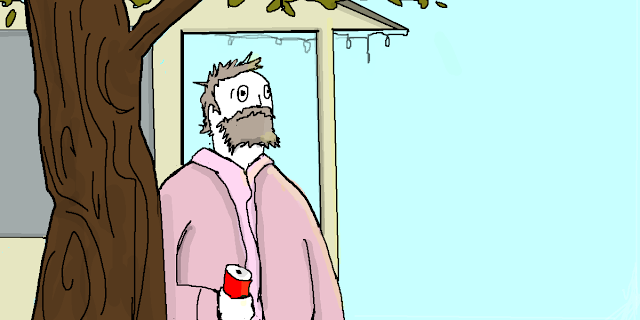 I did not interact with Richard. I just saw him. He probably didn't even know. He stood in his driveway for a minute or two and then went back into his house. But I saw him. I think that was the main thing.

It was very exciting. A person lives next to us!  A person!  He lives right there! And I SAW him!  When will he go outside again?  What else does he do?  Does he know about dad? Who is his friend?  Does he like whales?  Is his house the same as ours?  Which room does his grandma live in?

Desperate to catch another glimpse of him, I'd lurk near the windows all day just staring at his house.

I think I expected it go somewhere. You can't find out there's a person living right next to you and then never get any answers. Maybe if you're 100 and you know everybody, but not if you're 3. Not when it's the first stranger you know how to find. I just wanted to know more. Anything.

And this is as far as it would have been able to go if it wasn't for the dog door.

My grandma usually supervised me while my parents were at work. She'd drink screwdrivers and do the crossword, I'd run around the house and do whatever. If she hadn't seen me in a while, she'd check to make sure I still had all my fingers, but escaping wasn't a big concern. The doors were locked. Just in case, there were jingle bells on the handles.
The dog door was the single weak point in the fortress. 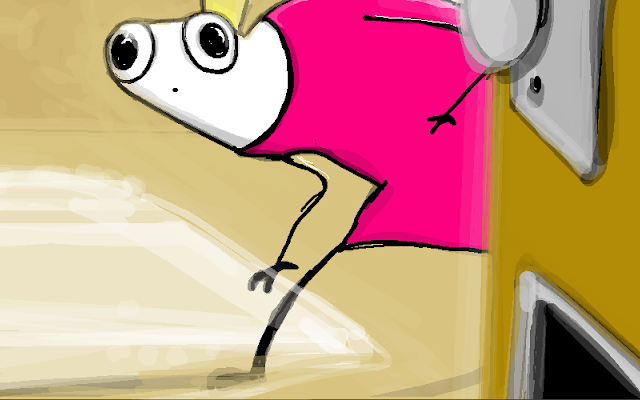 The revolutionary impact the dog door had on my ability to observe Richard was second only to the discovery of Richard himself.
I was cautious at first.
I just wanted to get a little closer. Just a little. I'd sneak out through the dog door and go stare at his house from the edge of our driveway, hoping this would summon him. When it didn't, I'd sneak a little closer. Maybe it'll work if I stand in Richard's driveway…. or, actually, maybe I'll just go over to this little window here and see what I can see…

I started sneaking out more frequently. I started sneaking out at night. And the fact that I was sneaking seems to suggest I might've been at least partially aware that this type of behavior should be a secret, but I don't think I'd reached that crucial developmental turning point where you're capable of recognizing how creepy you're being.
However, on the night I found the cat door in Richard's garage, even my undeveloped, fish-level brain could sense that a boundary was about to be crossed. A tiny, instinctual trace of doubt—the wisdom of my ancestors whispering through the ages: This might be too weird of a thing to do…

Of course, one of the main features of undeveloped, fish-level brains is poor impulse control, and before I could complete the thought, I was in Richard's living room. 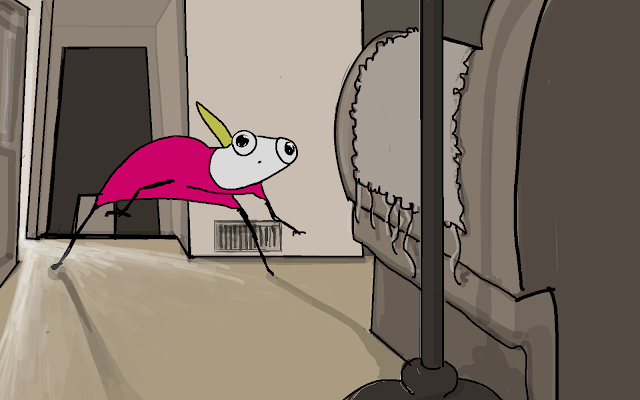 I hadn't prepared for this possibility. I'd dreamed of it, sure. But I wasn't expecting it to HAPPEN. So I just stood there for a little while and then retreated to regroup.

A concrete objective never emerged, but the missions became bolder and more frequent. I started bringing things back with me. Richard's things.
They seemed valuable, somehow. Richard likes these things…. perhaps they contain the secret to Richard….

A nonsensical collection of Richard's possessions slowly accumulated at the back of my toy drawer.
This would prove to be my downfall.
Long before that, though, my mom noticed that I'd mysteriously disappear sometimes. She wasn't worried yet because she didn't think I knew how to get out of the house, but one day she asked me where I'd been.

"Hanging out with Richard."

"Hanging out" was a misnomer—Richard had been hanging out by himself and I had been standing in his hallway just out of view—but this was concerning news for my parents. They didn't even know that I knew Richard, let alone that we'd been "hanging out." They went over and knocked on Richard's door and asked him about it, probably with thinly-veiled suspicion regarding Richard being a child predator. And Richard, who was still somehow unaware of all the hanging out we'd been doing, told them he didn't know anything about that.

I imagine things were tense for a bit. The suggestion that I'd been hanging out with Richard was disturbing for both my parents and Richard. But the clues piled up. I couldn't control myself. I took more things, bigger things. I also branched over into hiding things for Richard to find. Pretty rocks, pieces of string, letters I'd tried to write. At that age, I didn't know how to spell very many words, so the messages were fairly cryptic: the entire alphabet, followed by the word Mom and a drawing of the sun. Rampant scribbling, hundreds of tiny circles, and... is this a spider??

The spider was supposed to be Richard. I hadn't figured out how many arms and legs people are supposed to have yet, so I just put a whole bunch on there and hoped it was enough. I didn't want him to feel offended because I shortchanged him on legs.

It must've come off like being haunted by a defective but well-meaning ghost.

The connection should have been obvious. But, when faced with a mystery like, "Where did my remote control go? Why is there a piece of paper with a child's handwriting on it hiding in the VCR? And how do these rocks keep getting in here?" almost no rational adult would jump to the conclusion "because a child has been sneaking in through my cat door and leaving these for me to discover." Not even with clues. I don't know what theory Richard came up with to explain it, but it almost certainly wasn't that one.

The thing that finally blew my cover was stealing Richard's cat.

Stealing it wasn't the original plan. The opportunity presented itself, I seized it.

It was a strong animal. Getting it into the drawer was difficult. I didn't have a plan for what to do with it, but I knew I had something valuable, and I think the thought process was that I should save it for later. For when I figured out how to capitalize on the probably unlimited potential of this.

It lived in the drawer for a while. I don't know how long. Hours, probably. 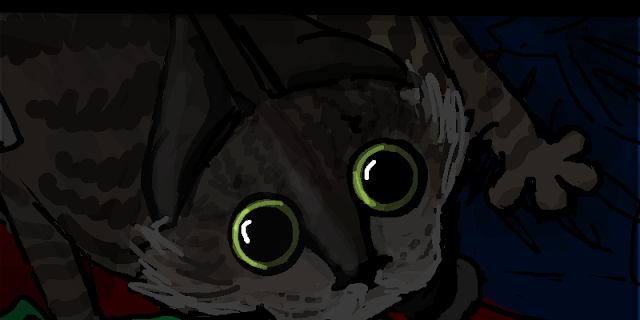 And now it is time for a quick fact about cats: cats aren't good secrets, because, under extreme duress, they have the ability to make a sound like:

My parents eventually realized the sound was coming from inside the house and located the source of it. 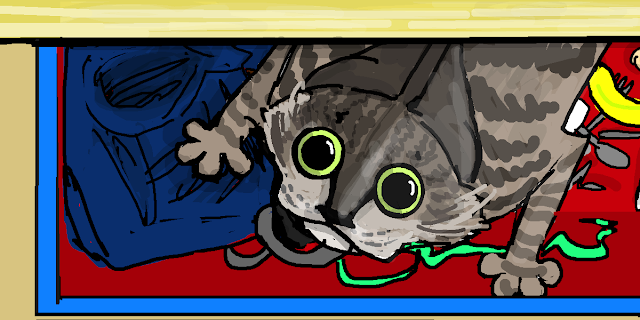 They weren't expecting to find quite so many of Richard's things.

I don't know if they put the pieces together immediately, or processed them individually as they came up—"first of all, there's a cat in this drawer; How about that. Next up: there appear to be a considerable number of objects under the cat. This one is a shoe. This one is a piece of bread. This one is a credit card bill. Huh…it's addressed to 'Richard The Neighbor….'"—inching closer to the truth with every clue until the ultimate answer to "What does 'hanging out with Richard' mean?" was revealed.
There was more than enough evidence to answer the question.

That's got to be a strange moment for a parent. There's this omnipresent fear of predators and monsters, and you just… you never quite expect to find out the monster is your kid.

They confronted me after a strategy meeting about how the fuck to handle this. That's not something the books prepare you for. There's no chapter on what to do if you suspect your child is a predator. There's no Hallmark card for "Sorry we accused you of being a molester; we didn't realize our kid was sneaking into your house and stealing your spoons and animals and watching you while you sleep. We're really, really sorry."

That primal instinct I'd felt in Richard's garage flickered back online a little bit. Looking at the objects, and the freaked out cat, and my parents' confused faces, I realized that yeah, maybe this had been a weird thing to do....

I felt like I should explain why I had done this, but I didn't know either.

So we all just stood there, feeling weird about ourselves and each other.

The cat was stoked to be free, though. 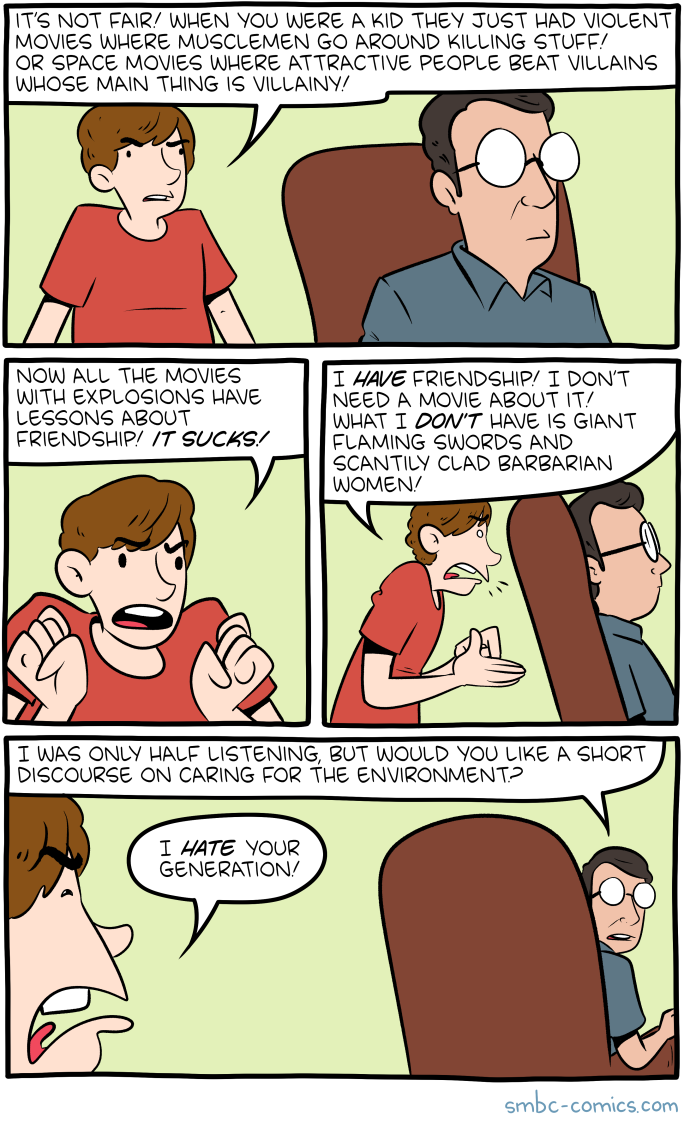 Hovertext:
Maybe movies about angry men without morals just got crowded out by news opinion shows?